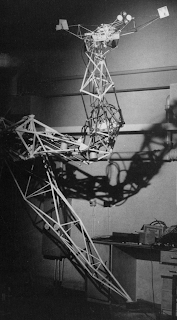 Senster worked using sound sensors and motion detectors to locate participants in the audience and follow them with a kind of curiosity that made it seem very life like.

He didn't attempt to mimic life, but rather emulate characteristics of living things. In "Towards a Thinking Machine," Ihnatowicz discusses artificial intelligence, saying that although "scientists are fond of definitions," there are no adequate definitions for "notions such as learning, perception, image, memory, cognition, knowledge, [and] not to mention intelligence itself. [They] are not in any absolute sense definable because they are all descriptions of relationship and attributes of natural systems and their environments. They can be demonstrated and appreciated more easily than defined or proved."

He says to perceive is to become aware of a change, that ultimately perception is just a comparison. This is an important concept - since much of my work deals with perception, and how we quantify and qualify different methods of perception to create our reality - a reality that I'm coming to understand as a simulacrum of reality in our minds: one that displaces the real thing, because it becomes the only reality that matters.